Stocks rose Thursday but came off session highs, after the three major indices closed at their highest levels in more than one month a day earlier. Investors digested a new round of jobless claims that were higher than expected, alongside dimming prospects for more stimulus in the near-term. /PRNewswire/ — Leading O/EMS provider Adroit Trading Technologies was honored to participate in Greenwich Associate’s webinar, “The Latest in Fixed Income…

Just looking at Italian bonds, observers would have little clue about the nation’s dire economic situation.

Instead of trading as though its credit rating is on the precipice of junk status, the debt is acting more like a haven, according to Moody’s Analytics data. Italy’s coalition government can raise money for 10 years at 0.76%, a whisker above a record low. The spread over German bonds, a key gauge of risk, is the narrowest in years.

But little has changed on the ground. Italy is weathering its worst recession since World War II, its debt load has spiraled near 160% of the economy’s size and two of the top credit-rating agencies rank the nation just above non-investment grade. And now a resurgence in coronavirus cases is sweeping across Europe. 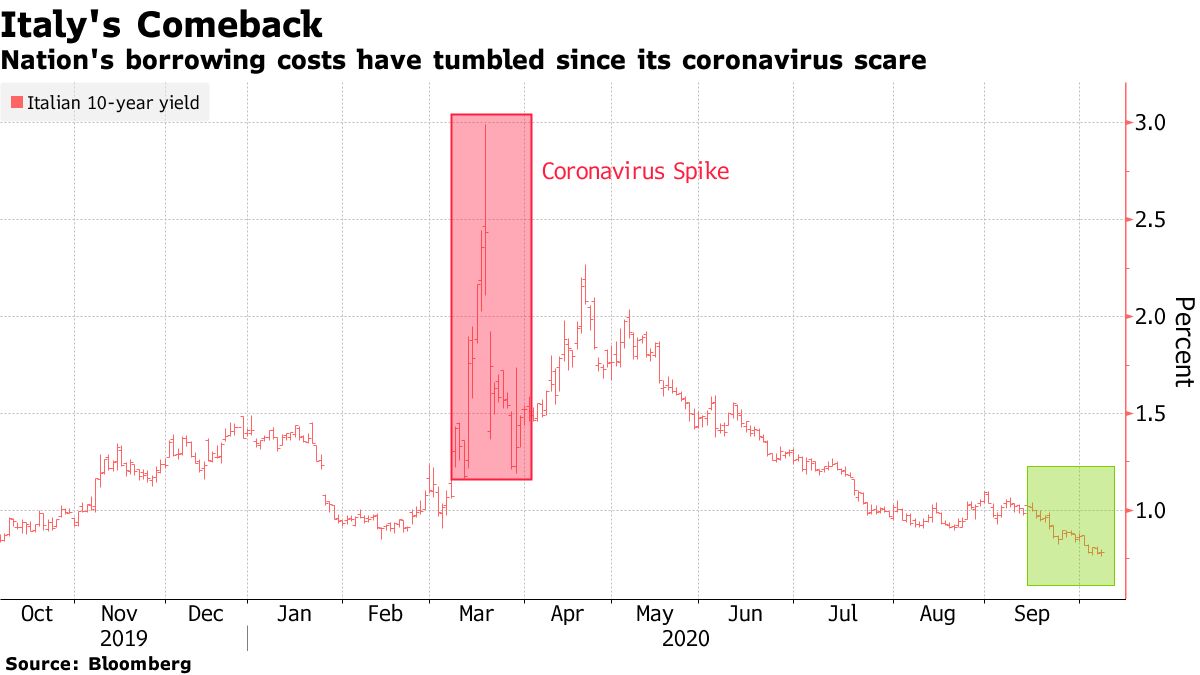 Its lifelines have been unprecedented bond-market support from the European Central Bank and the prospect of aid from the European Union’s planned recovery fund, helping to make Italy’s bonds the euro zone’s best performers in the third quarter.

“Clearly there are big differences between our ratings and the bond-implied rating,” said Kathrin Muehlbronner, lead sovereign analyst for Italy at Moody’s Investors Service.“Italy needs to use this opportunity.”

Data from Moody’s Analytics, a partner entity, show Italian bonds are trading as though they’re rated A2, similar to Ireland, rather than their own Baa3 grade. Italy’s three-year yield fell Thursday to a record low of minus 0.206%. 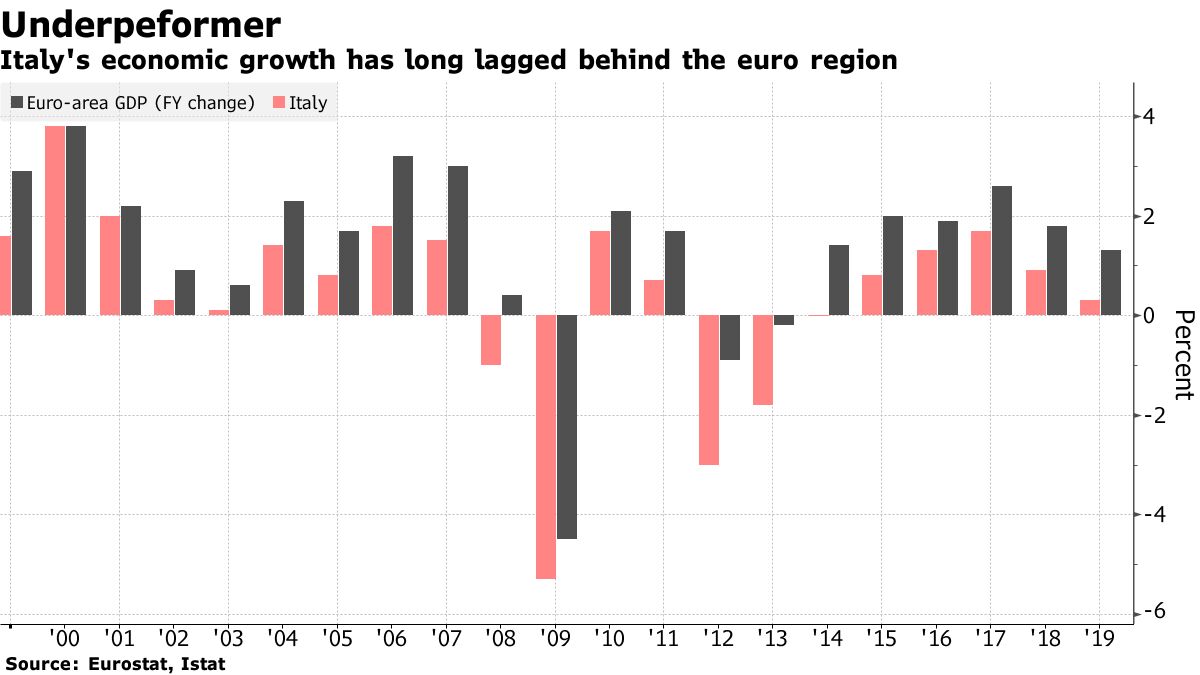 Turning around the euro area’s third-largest economy won’t be easy. For much of this century, it has seen anemic growth relative to peers. The government’s own projections have the economy shrinking 9% this year amid the pandemic and expanding only 1.8% in 2021 under a worst-case scenario.

“When others in the euro zone grow at 2%, Italy grows at 1% and if the others grow at 1%, then Italy barely grows,” said Muehlbronner.

Italy is likely to receive as much as 209 billion euros ($246 billion) in grants and loans from the bloc, making it the top beneficiary of the recovery fund, which aims to get the money flowing next year.

Rome has plans to invest EU cash in digitalization, infrastructure, schooling, de-bureaucratization and job programs, but it needs to act quickly in order to meet its goal of bringing the debt ratio down to 151.2% in 2023. The EU has stipulated that at least a portion of the money must be spent on green projects.

“Recent government choices seem to point more toward supporting demand through a plethora of bonuses and cash benefits, often unrelated to sectors more impacted by the crisis,” said Rosamaria Bitetti, an economist and lecturer at Luiss University in Rome. “We hope the EU will provide stricter guidance on spending during a systemic crisis to avoid the risk of wasting resources.”

For Moody’s, which is set to review Italy Nov. 6, the hurdles the nation needs to overcome are still significant, including heavy bureaucracy and large wealth gaps between its north and south. A downgrade to junk could see the its bonds removed from key indexes, spurring a flood of forced selling. Fitch Ratings, the other agency that ranks Italy just above non-investment grade, reviews the rating on Dec. 4.

Another risk is that the EU’s planned 750-billion-euro economic recovery fund could fail to materialize. If that happens, the delicate balance in Italy’s debt market could be undone.

“Should we enter December with no progress” on the recovery fund “and no visible path toward a compromise, while being unsure about ECB policy for 2021, markets could start to reprice more meaningfully,” strategists at Bank of America including Sphia Salim wrote in a note. “A breakdown in negotiations would easily see markets test not just 2020 but 2018 wides,” they said, referring to the Italy-Germany yield spread.

Still, investors are more upbeat than they have been in a long time, thanks largely to the ECB, which owns over a fifth of Italian debt, according to NatWest Markets. In effect, the central bank is a guaranteed buyer should things go awry — a sudden political upheaval, for example — and Goldman Sachs Group Inc. expects the institution to further boost its stimulus package this year.

Aviva Investors is among those who see room for Italy’s borrowing costs to drop further, in spite of its mounting liability load. Indeed, Japan provides an example of a heavily indebted nation that’s able to borrow at rates close to zero. And investors from the Asian nation, seen as some of the most risk averse, bought a record amount of Italian debt in August.

Joubeen Hurren, a money manager at Aviva, sees the country’s 10-year yield premium over Germany falling below 100 basis points, a level not breached since 2016, from around 130 basis points currently. The gauge surged above 300 basis points during the selloff in March.

“The EU recovery fund is meaningful, in that it can potentially solve or at least postpone debt sustainability issues,” he said, adding that his fund is positioned for a rally in inflation-linked bonds. “The outlook for Italian bonds is quite constructive.”

— With assistance by James Hirai

Stocks rose Thursday after the three major indices closed at their highest levels in more than one month a day earlier. Investors digested a new round of jobless claims that were higher than expected, alongside dimming prospects for more stimulus in the near-term.

Shares of Regeneron (REGN) jumped after the drugmaker said it had submitted a request to the U.S. Food and Drug Administration for emergency use authorization of its Covid-19 antibody treatment, which had been taken by President Donald Trump after his Covid-19 diagnosis. And IBM (IBM) surged nearly 6% after announcing it was spinning off its managed infrastructure services business into its own public company.

Traders had previously been clinging to hopes that some aid out of Washington – if not a multi-trillion dollar, comprehensive virus relief package – might transpire in the near-term.

However, House Speaker Nancy Pelosi, in her weekly briefing on Thursday, dialed back expectations for some stimulus measures to be unleashed ahead of the November elections. Pelosi said she would not advance a standalone bill to provide relief to airlines, in absence of other stimulus measures. A day earlier, she had signaled she might be open to passing a smaller, targeted bill, which Trump had previously suggested he would support.

House Democrats last week voted to advance a larger package to inject another $2.2 trillion in aid to various parts of the economy.

“It’s been the question of the day, as to why we got the tweets we got over the last 24 hours, the market reaction we got into [Tuesday’s] close, and then the rally today,” Ed Mills, Raymond James Washington policy analyst, told Yahoo Finance Wednesday afternoon.

“Investors I’ve spoken to at Raymond James have been mixed. Some believe that this makes it much more likely that regardless of the outcome of the election, there’s a deal to be had in the lame duck [session] before the Dec. 11 deadline to funding the government,” he added. “Others said this is a clear signal from the market that they are now expecting a Democratic sweep. That would be the package that would be the largest. However, that might have to wait until February or March to be fully implemented.”

Meanwhile, Federal Reserve officials continued to voice their concerns that the tenuous economic recovery would be weakened in absence of further near-term fiscal stimulus.

Another sign of tepid economic activity arrived Thursday via the Labor Department’s weekly jobless claims report, which checked in at 840,000. Consensus economists expect to see another 820,000 new claims filed last week, up marginally from the prior week. However, continuing claims — a closely watched metric — fell unexpectedly to below 11 million.

The energy sector led gains in the blue-chip index, as U.S. crude oil prices rose more than 1.85% to more than $40 per barrel. The real estate and financials sectors also gained.

The labor market remained stagnant in the latest week, with new jobless claims ticking up to 840,000 — above consensus forecasts of 820,000. However, continuing claims dropped unexpectedly below 11 million, in an encouraging sign that some longer-term jobless were getting back to work.

Stocks are holding gains, aiming to build on Wednesday’s strong rally that carried the S&P to its best session in months.

Adjusted earnings were $2.49 per share, versus estimates for $2.78, and the company’s quarterly operating margin of 37.4% contracted over last year by more than one percentage point. Domino’s said in a statement that its bottom-line was pressured by “higher variable performance-based compensation expense as well as Covid-related costs, including additional compensation and enhanced sick pay for frontline workers.”

For tutorials and information on investing and trading stocks, check out Cashay “Discussing the future of fixed income trading was particularly exciting, as both Jeremy and Dwayne have deep expertise in fixed income markets and understand exactly how powerful the right EMS can be,” said Mr. Jaglan after the webinar concluded.

There is tremendous change going on in rates, credit, and structured credit trading with increased electronification, new protocols, and new venues.

The discussion touched on Adroit’s strengths as a trading platform that can both dramatically decrease transaction costs while freeing up traders to focus on strategy and complex trades. Adroit’s unique modular design and sophisticated out-of-the-box logic make the platform a powerful tool for both traditional asset managers and hedge funds.

The session also addressed the difficult decision firms face when evaluating whether to build or buy their trading solution.

“I hope that one of the major takeaways of our conversation was that, while past vendors have broadly failed to deliver on FI trading platforms, buying is by far the most effective approach with the right product,” Mr. Jaglan said Wednesday morning, “And Adroit stands out as the clear product leader in institutional-grade fixed income trading.”

For those who missed the live webinar, a recording will be made available on Adroit Trading Technologies’ website.

Adroit’s Alta is the first multi-asset front office O/EMS solution designed explicitly for buy-side firms. It is designed from the ground-up to handle the intricacies of trading complex OTC assets – Swaps, FI, and FX. Since 2014, Adroit has been powering the most sophisticated of investment managers with a passion to eliminate regulatory and operational risk, minimize transaction costs, and maximize trader productivity. For additional information, please visit www.adroit-tt.com.